From Our President (New) 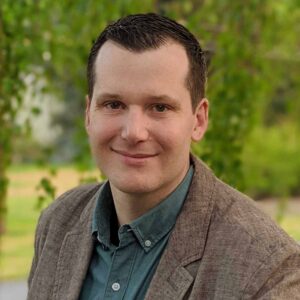 Brian Kausler is President of Skip-Line, LLC. His interest in technology started at a very young age when he was given a Commodore 64. To foster this interest, his mother would read DOS for Dummies before bed. When Brian received his first Windows 95 PC, he would break it nearly weekly and had to learn how to fix himself (often calling in an uncle to help). When the internet started to become more available, Brian learned HTML and would play hyperterminal games.
Brian went to school at Eastern Oregon University and studied Business. In the summer months, Brian fought wildland fire to help pay for school. Fire took him around the western United States to beautiful national parks, new cuisines, and communities with their own subcultures. This was the kindling that began passion for travelling.

Brian continued fighting fire after graduating in 2008 as there were very few entry-level business jobs available during the recession. He eventually took a sales position with Comcast Spotlight, selling cable television advertising slots. This proved challenging as television commercial production was too expensive for small businesses, so Brian had to learn how to fill a marketing manager role for many companies that sometimes meant shooting and editing video or graphic design.

Brian then decided to try running his own business, and bought a small restaurant in Baker City, OR. It was a fun, eclectic rice bowl restaurant with some sandwich and noodle options. Brian was unable to secure financing for expansion and decided to sell the business. Brian accepted a “temporary” role with Skip-Line as a bookkeeper, but quickly found himself in inventory management, marketing, support, and management.

Brian has two young boys and a wonderful wife. The boys are challenging, but also their vivaciousness is inspiring (and exhausting).

Hello, I am Brian Kausler, President of Skip-Line.

When I started with Skip-Line, I could not have imagined we’d become the company we are today or how clear the vision for the future would be.  In 2013, which really wasn’t that long ago, Skip-Line was struggling to grow out of a small business shell and launch new products on a large scale.  Tesla cars were still just very expensive toys in Southern California and machine learning was a thriller movie plot. Now lane departure systems and adaptive cruise control are nearly standard in new vehicles, machine learning and automation are starting to become commodity technologies, and data is critical in nearly every industry to optimize business – especially in the current environment where there’s no room for waste.

There’s a greater need for markings to guide autonomous vehicles, yet funding to implement higher quality marking systems is limited. We feel that it is our duty to collect data and help decision-makers make the best decisions possible with their limited resources.  We’ve created, and will continually develop, the Spec-Rite Online platform to understand road markings like never before. With these tools, Skip-Line will connect road markings to a safer, smarter future.